Thanks for looking at our newest offering of Frozen Green Chile.

The Chile Guy has been shipping “dry” bulk chile for over 20 years and we are very excited about the frozen products we are offering now.

I grew up in New Mexico and for New Mexicans eating Green Chile, I can tell you it is not just a spice consumed occasionally on holidays—it is a necessity of life! 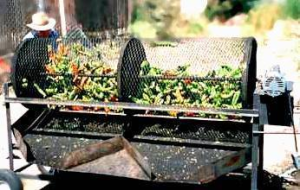 Hatch Green Chile every fall. I would spend an entire Saturday afternoon roasting, bagging and freezing it, and then enjoying it for the rest of the year.  I would have him ship it express even though the cost of shipping was two to three times the cost of the product.  A bag of fresh green cost $20, but I just had to have it!

Which brings me to the point of this offering and current events.  Those who are “addicted” to Green Chile will understand when I say, nothing but nothing compares to Fall in New Mexico, when it seems as if everyone is standing on a street corner intent on getting their year’s supply of “Green Gold” for their freezers.

It was not always this way.  The Green Chile roast in the Fall was a seminal event for New Mexicans, but prior to the ubiquitous freezer in every garage we have today, it was a fleeting event.  Before folks were able to freeze large quantities of green chile, the majority of the crop ripened and was dried for use as red dry chile pods, powders and flakes.  Green chile, if it was preserved, was roasted just as it is today and then dried.  This product is called “Pasado” and it is sold at very high prices relative to frozen or fresh green chile because of the labor-intensive nature of roasting, peeling and drying.  The economics of it are also difficult with the fresh chile converted to dry losing 90 to 95 percent of its water weight in the process.  So, 100 pounds of whole fresh green chile leaves you just under 10 pounds of Pasado after roasting and drying.

In terms of transportation, there is a huge difference in cost.  Although the dry green is considered a delicacy and is expensive, it is not nearly as popular or in commercial use as frozen green chile.   The economics of dry chile allows me to ship thousands of pounds of Chipotle to Israel or India, for example.  I won’t consider the frozen in those quantities to those places.

The Green Chile market has grown up.  Just 75 years ago, the majority of the chile was dried and sold for red chile pods, while today nearly 90 percent of the crop is harvested green and converted to frozen products with Food Service being the largest consumer of these products in New Mexico, the rest of the southwest and nationally.  From truckloads of 25 lb. cases to the 1-quart containers in your store frozen food section, it all has to be transported frozen!  And because it is 90 plus percent water that is some expensive shipping!  I would guess that through the supply chain, the transportation companies make as much money on frozen green chile as the farmer, packer and distributor.

As noted in an earlier blog,  drought or some other weather event can affect the crop and the price of the Green Chile, but once the crop is in and processed, that is the supply for the remainder of the year.  Once frozen, there is no new crop coming from anywhere other than the southwest.   So in addition to transportation, supply is finite and it being February and not September or October, businesses are looking at the supply chain and seeing what they have– that will have to last until next Fall.

Which brings me to the latest in the “While Supplies Last” Saga.  Recently one of the biggest suppliers of Frozen Green Chile, Bueno Foods, has had to recall its frozen product.  The Food and Drug Administration has discovered “possible”  Lysteria bacteria in some of its products.  And Bueno is recalling its products as a “precautionary” measure.  Precise numbers on the volume of green chile affected were not reported, but as Bueno the largest if not the most well known supplier of frozen green chile, it is hard not to see some disruption in the market for at least the two weeks it is reported to take for the recall to occur.

Bueno is a solid 62-year-old New Mexico company and they will overcome this setback to their distribution program.  The literal Spanish translation of the word “bueno” is “good” so I would imagine the marketing and sales team at the company is spending time considering its branding issue which is a far more significant problem in the long run than the recall itself.

That leads me to explain what I have offered in the products below.  I have listed the products as close to wholesale pricing as I possibly can.

That is why I had up not promoted significant supplies of frozen product up to this point.  The products I’m offering now changed my mind because not only should The Chile Guy carry New Mexico Green Chile, it should be the best product available. I believe the products listed below are simply superior to anything available on the web or anywhere.

It is hard for individuals to always take advantage of “Food Service” pricing so I am offering 5 and 10 pounds bags of Green Chile.  I’ll give you a quote for shipping and you can decide if it meets your price/value equation if you just have to have it.  Can’t eat 5 or 10 pounds?  Here’s a trick:  Defrost the bag to about the consistency of a snow cone, break into smaller containers and refreeze.  Always make sure you cook any green chile product  to 165 degrees for 10-12 minutes even if it says it is already roasted.

I have a strong supply of Hot and Mild offering half and full pallets.  It is a wonderful  New Mexico product that  I think is “waybetter ” than good!