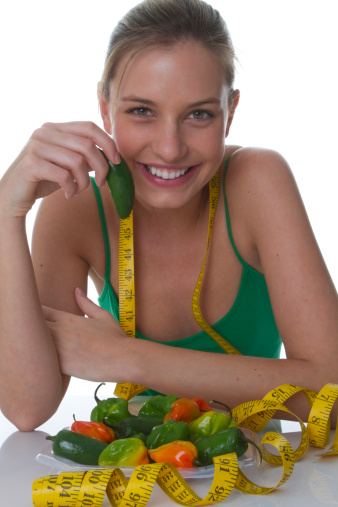 You might like the way it spices up your salsa and adds a kick to your cuisine, but did you know that peppers contain antioxidants?

If you’re a health nut and chile lover, you’ll be happy to hear that the spicier the pepper, the greater the antioxidant benefits. In case you’re not familiar, antioxidants prevent and delay cell damage responsible for aging.

The secret is capsaicin, the flavorless, odorless and colorless compound found in chile peppers. It’s what gives peppers their heat; the spicier the pepper, the higher the amount of capsaicin. Spicy habanero, Ghost and Scorpion peppers contain the highest amounts of capsaicin, but mild bell peppers have none.

What are the Health Benefits of Chile Peppers?

Let’s say you’re cooking and your spouse protests adding pepper because they’re too spicy (The Chile Guy does not believe there is such a thing! In fact, “too spicy” is an Oxymoron when discussing the benefits of Chile. It is the benefit of Chile!). Tell your spouse you’re only thinking of his or her health. Not only do chile peppers contain antioxidants, studies show that they have health benefits in the following areas:

Pain relief. This is only if used topically, but recent studies show that topical capsaicin alleviates the pain associated with osteoarthritis and psoriasis patients have also found relief with the compound.

Cardiovascular benefits. Red chile peppers like cayenne reduce blood cholesterol, triglyceride levels, and platelet aggregation. In one study, folks who ate a chile-containing diet had less damage to cholesterol and triglycerides compared to those who ate a bland diet.

Immunity.The beta-carotene and vitamin C found in many chile peppers (particularly red ones) can ward off infections and encourage healthy mucus membranes, increasing your immunity.

Weight loss. Since peppers increase heat production in the body, researchers believe that they can help people lose weight. In fact good friend Hedi Allison wrote “The Chile Pepper Diet” which is an excellent treatise on boosting metabolism and losing weight through Chile Peppers.

If you find peppers spicy, just keep eating! Capsaicin hits pain receptors on your tongue’s nerve cells, sending a pain message to your brain. However, eating chile peppers consistently desensitizes your nerve cells, so you’ll be feeling less of a burn in no time. Your body does this through endorphins. Endorphins are a body-produced drug to ease pain. For example, long distance runners are able to produce endorphins to ease the pain they feel in their muscles and joints. It puts them in a euphoric state that they become addicted to—hence the term “addicted to his own endorphins.” Eating chile peppers has a similar effect. This chemical chain reaction is also the secret formula in the success of sports bars and beer sales.  Alcohol acts as a neutralizer to the capsaicin cooling the fire (cold beer helps.) and the pepper consumer ingests more capsaicin (hot salsa) gets the endorphin rush and quenches the fire with more cold brew! And the cycle is repeated. Patrons eat more hot stuff, the bar owner sells more beer, the patron gets the endorphin rush and possibly quite drunk, and maybe enjoys the game as well.  Talk about repeat customers!

From 5 pounds to 50,000 pounds, you can count on The Chile Guy to provide chile for all of your commercial needs. See our wide selection of dried, whole and powdered chile at wholesale prices, or contact us with questions.

(Information found in this blog was found on www.whfoods.com)