Chile lovers often mistake poblano peppers and dried ancho as the same thing, but they’re only half right! Ancho is the dried form of poblano peppers. Dried anchos are mild on the Scoville scale of heat, offering a earthy, paprika-like taste. 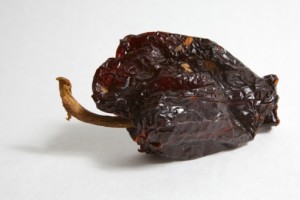 Poblano peppers are native to Puebla, Mexico. In fact, “poblano” is also the word for an inhabitant of Puebla. “Ancho” means “wide chile” in Spanish, reflecting the wide, almost heart shape of the pepper. Both red and green varieties exist, with the red variety being significantly hotter than the green. Dark green chiles mature to reddish brown in about 80 days. Once dried, ancho peppers take on a deep red or brown color with a medium thick flesh.

Dried ancho peppers are the sweetest of dried chiles. The dried exterior resembles a raisin in taste, while the interior produces heat that’s mild on the Scoville scale—about 1,000-1,500. Whole dried ancho peppers offer depth and complexity to restaurant dishes and commercial food.

Anchos more than pull their weight when it comes to wholesale costs. Dried ancho peppers have a high yield of flesh to skin, making them an efficient and delicious addition to sauces, salsas, enchiladas and Mexican cuisine. Dried ancho peppers are also frequently used to enhance the color of food in commercial applications.

It is chile though with a characteristic "peppery" taste with modest heat and adaptable to a wide range of recipes from simple to complex.  Chile Dogs to Moles.

Several years ago, an executive chef at a major league baseball park once specified the type of pepper needed for Chili Dogs on opening day and for the rest of the season this way:  "I need a Chile Powder that I can make a sauce with that will make a 5-year-old feel like they are eating  ‘Chili’ but that chili won’t make them cry." Ancho Powder was selected and they have been a customer since.